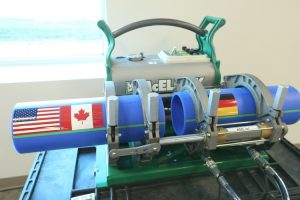 The symbolism of the Worldwide-North America partnership was represented by a ceremonial heat-fusion connection, which joined two pieces of 6-inch Aquatherm Blue Pipe together, one labeled with a German flag and the other with U.S. and Canadian flags. Just as the company’s heat-fused joints are as strong as the pipe itself, this partnership is built to last. 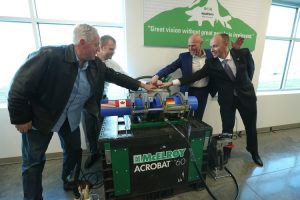 Attendees toured the new facility, which features ample space for operations, including office space for corporate staff, engineering and quality-assurance laboratories; extensive warehouse space and a state-of-the-art design and fabrication facility. The warehouse now represents one of the largest concentrations of PP-R piping in North America and will provide customers access to a full inventory line of Aquatherm piping systems ranging from ½ inch to 24 inches.

During the open house, the company’s Design and Fabrication Services Team also performed multiple demonstrations showcasing large-diameter fusion, custom spool and manifold design and creation and the new Hot Tap Tool, which was designed in partnership with McElroy.