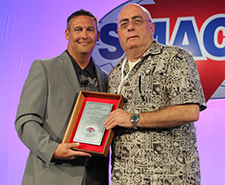 “This year’s contractor is a longtime friend of SMACNA,” said 2017 SMACNA President Joseph Lansdell. “He values being a team player more than taking the spotlight which makes honoring him with SMACNA’s highest honor so rewarding.”

Goodman worked with SMART General President Joseph Sellers and the organizers of the SMART Heroes Program to develop an effective way the sheet metal industry can serve the needs of veterans transitioning out of the military and, at the same time, bring them into the ranks of the SMACNA contractor and SMART local union.

The SMART Heroes program provides one year of apprenticeship curriculum free of charge to enlisted men and women of the U.S. Military.
A veteran of the U.S. Army, Goodman went to college on the GI Bill. He, like other veterans tasked with creating the Heroes Program, has a soft spot in his heart for helping fellow military members needing a solid, family wage career. He is supportive of the effort to bring these talented, professional and motivated veterans into the sheet metal industry during a shortage of crafts persons and unlimited opportunities.

For many years, the Bay Area SMACNA board of directors benefited from his tremendous work ethic, intelligence and dry sense of humor as he served the association in numerous leadership roles. His term as chapter president ends later this year. He also is a member of the SMACNA Southern California chapter.

In addition, he represents ACCO as a grassroots Premier-Level contributor on the Summit Council of the New Horizons Foundation. The foundation has a strong track record of delivering innovative, cutting-edge research and practical, real-world education for every level of management.

Goodman began his career at ACCO Engineered Systems after graduating in 1973 from Cal State Northridge with a Bachelor of Science in Business Management. In 1974, he joined the firm’s purchasing department. He transitioned into the construction department in 1977 where today he is the executive vice president.