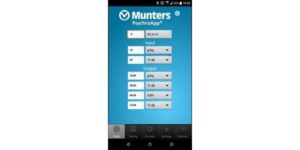 Munters has launched its PsychroApp (psychrometric calculator) and ProApp Datacom (used by data centers and critical facilities for sizing cooling systems and energy efficiency) for Android devices. Previously available for iOS platforms only, Munters has released Android versions, as well as improved and updated iOS versions of both apps.

Both iOS and Android PsychroApp users will enjoy a fresh, clean look and feel with this latest release. Munters PsychroApp, the psychrometric calculation tool for making accurate calculations of the thermodynamic properties of moist air, was first introduced to the market in 2011. For nearly a decade, users have enjoyed making quick and easy calculations for total, sensible, latent and moisture loads of any process more accurately than using psychrometric charts.

ProApp Datacom iOS, introduced to the market in 2015, was specifically designed to meet the needs of HVAC design engineers needing a time saving calculation tool for design and analysis for sizing of cooling systems and energy efficiency within data centers and critical facilities. Users will find the Android version to be equally convenient for making quick calculations.

Both first of their kind apps use industry-standard ASHRAE equations and will meet demands of users around the world by now being available for Android platforms and downloadable via Google Play. The updated PsychroApp for iOS devices is available via AppStore. Both apps are free to download, come in multiple languages and are available directly through the online stores or by visiting www.munters.com/apps.