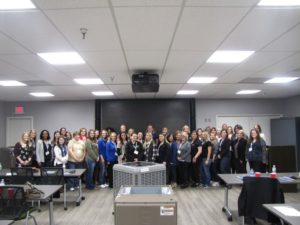 The attendees at Johnson Controls Inaugural Women in HVAC event.

MILWAUKEE, Wis. – In 1974, Penny Yonan Padgett was asked by a friend to fill in for her as a receptionist at an HVAC company. Forty-four years later, she is still in the industry, having worked her way up to territory manager for YORK and another manufacturing division of U.S. Air Conditioning Distributors. “I was one of the pioneers,” said Padgett. “HVAC is my life and my passion.”

Lisa Connors started her career as a mechanical engineer in the electrical field, but after learning about her father-in-law’s business in refrigeration, she decided HVAC was her true calling. Connors is now a project manager for ACCO Engineered Systems. “My job can be high stress, but it is very rewarding,” said Connors. “It’s a tough field in general and can be even tougher for women.”

Lauren Roberts was born into the HVAC business, although she hadn’t planned to enter it at first. She is now president and CEO of cfm Distributors. “When I was in college I was asked to join the family business,” said Roberts. “I worked my way up for 14 years and was named CEO in January.”

Although they didn’t initially consider HVAC as a career choice, these women discovered it was their true professional calling after being exposed to the business. They recently joined 35 other women in HVAC, spanning all four corners of the country, to learn about Johnson Control products and programs, share stories, passion and vision for the HVAC industry.

The inaugural Ducted Systems Women in HVAC event, held in early April, provided women with knowledge, networking and inspiration to serve as leaders in the HVAC industry. The two-day event included visits to Johnson Controls plants in Norman, Oklahoma, and Wichita, Kansas, where they toured the training, testing and manufacturing facilities.

Attendees were given an overview of Johnson Controls’ residential and commercial HVAC equipment and controls, including detailed walk-throughs of the residential products. They also participated in sessions on warranties, technical services, business and technical training programs.

Johnson Controls has been at the forefront of recruiting women to pursue careers in the HVAC industry. The company created a Women’s Resource Network nearly a decade ago and it has since grown into a global organization with mentors and groups worldwide.

The inaugural event was so popular Johnson Controls plans to make it a biannual event. The second Women in HVAC event is scheduled to take place in September 2018. “When the invitation came out, I jumped on it and promoted it to our customers,” said Roberts. “It was a great educational experience and helped us create our own network. I highly recommend it for any woman in HVAC.”