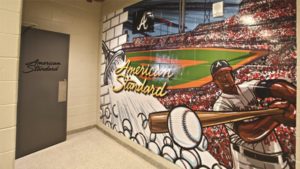 PISCATAWAY, N.J. ― American Standard, part of the LIXIL Corporation, has lauched customized branded restrooms at Georgia’ SunTrust Park – home of the Atlanta Braves – in time for the 2018 baseball season.

A highlight of a three-year partnership between the plumbing brand and the longest continuously operating franchise in Major League Baseball is the inclusion of official American Standard branded restrooms in this 41,084-seat sports facility that opened in March 2017.

Located on the main level, these unique women’s and men’s bathrooms include decorative murals that celebrate the American Standard products integrated with popular baseball imagery. The illustrations – which incorporate clever factoids about water use and the ballpark – were created by Midwest artist Adam Turman, whose bold style uniquely blends elements from both storied organizations.

These branded restrooms exclusively feature American Standard toilets, urinals, sinks, faucets and showerheads, which were selected for their innovative technologies that deliver reliable operation with heavy use, while also saving water and energy costs. In addition, restrooms throughout the ballpark – on the general and club levels, plus employee locker rooms – showcase these same stylish, durable and water-efficient fixtures and faucets.