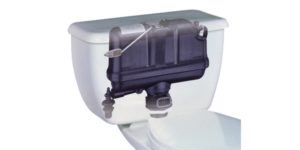 Flushmate is providing commercial facilities of all types with its pressure-assist technology as an alternative to traditional gravity-based systems.

Now operating on flush volumes as low as 1.0 and 1.28 gpf, Flushmate systems utilize compressed air to “turbocharge” water, resulting in flushing performance equal to 3 1/2 gallons or more to assure extraction and superior drainline carry. As a result, the Flushmate 504 Series system saves up to 30 percent more water and delivers a cleaner bowl than conventional technologies.

Flushmate-equipped bowls are hydraulically designed to push contents out of the trapway, as opposed to gravity-fed toilets that siphon – or pull – waste out of the bowl. Siphoning requires a more complicated trapway that can impede performance.

Flushmate-equipped bowls also utilize a larger-diameter trapway with fewer bends, reducing the likelihood of double flushing and stoppages and engineered to extract waste earlier in the flush than conventional fixtures for a cleaner drainline. Flushmate-equipped water closets are keeping commercial restrooms operational across a variety of markets.