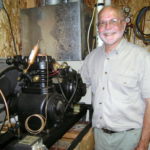 Selected by ASME’s History & Heritage Committee, Nagengast was chosen for his collected publications on the history of air conditioning and refrigeration, including more than two dozen articles and two co-authored books: “Heat and Cold: Mastering the Great Indoors: A Selective History of Heating, Ventilation, Air-Conditioning and Refrigeration from the Ancients to the 1930s” (1994) and “Adventures in Heat and Cold: Men and Women Who Made Your Lives Better (2020).”

For over 40 years, Nagengast, a consulting engineer from Sidney, Ohio, has educated his fellow practitioners and the public on the history and social impact of refrigeration and air conditioning. After graduating in engineering from California Polytechnic State University in 1971, he attended a year of graduate school and worked for seven years with the Copeland Corporation, focusing on refrigeration systems, before becoming a consultant. A longtime member of the American Society of Heating, Refrigerating, and Air Conditioning Engineers and a mainstay on that organization’s Historical Committee, Nagengast published his first historically oriented article in 1972 and began regularly publishing historical articles on the history of climate control, especially air conditioning and refrigeration, a decade later.