Charlie Black Elected to AMCA International Board of Directors 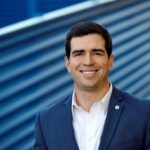 Charlie Black, director of air control solutions, sales and marketing for Ruskin, has been elected to the Air Movement and Control Association’s International board of directors. Black was among four new members elected to the board. The term for each seat is three years and expires in October 2023.

In addition to his newly appointed board position, Black’s involvement with AMCA International includes work on damper, airflow-measurement-station and louver test standards. He also participates on the Air Control Code Action and Review and North American Regional Steering committees.

Black joined Ruskin in 2014 and has held a variety of positions, including director of sales and marketing, regional sales manager, sales pricing strategist and project manager, before recently being promoted to his current role as director of air control solutions, sales and marketing. He holds a bachelor’s degree in finance from the University of Kansas and an MBA from the University of Missouri-Kansas City. Black has also received continuing education HVAC and mechanical engineering training and is involved in executive mentoring and coaching.